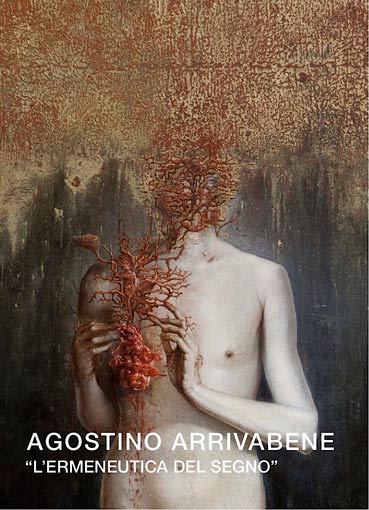 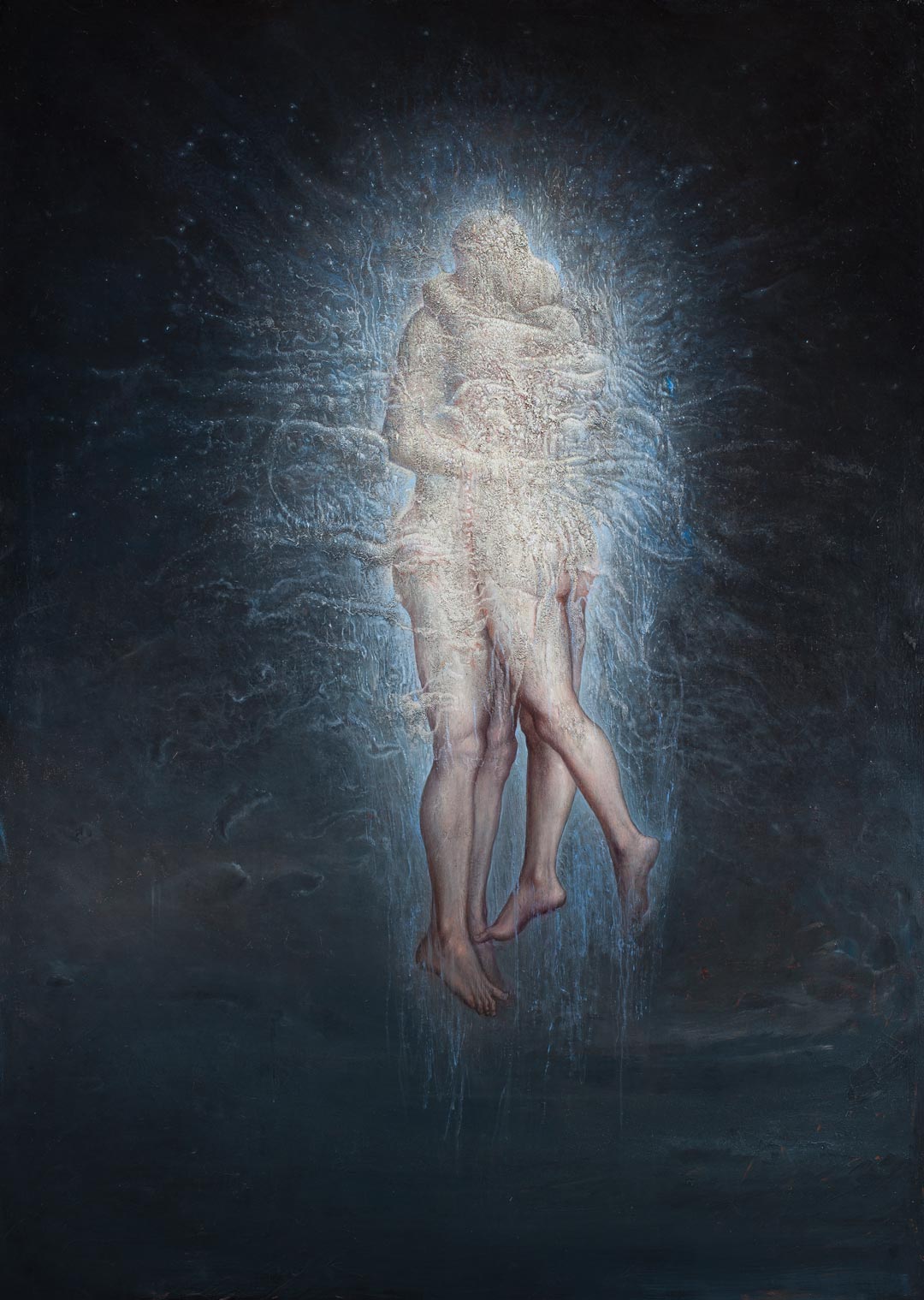 
3 Marzo 2016 | solo show   Cara Gallery is pleased to present Agostino Arrivabene’s first solo exhibition in New York – Hierogamy On view March 4 – April 23, 2016 Opening Reception Thursday March 3, 6 – 8 PM The itinerary, put in place by Agostino Arrivabene for his Hierogamy exhibition, denotes the arrival point of a personal and artistic journey that is unique and original, yet at the same time universal. The artist draws from his entire patrimony of shapes and codes to create, through his canvasses, a truly alchemical act that makes the surfaces burst into song, creating a chant that can unite dissimilar notes and turn them into a symphony. To create his personal “Lapis Philosophorum” (Philospher’s stone), in addition to the dialogue between the hermetic images of Alchemical Art and the archaic, past languages of European Art, Arrivabene has undertaken candid incursions into G.B. Piranesi’s prints of Ancient Rome and into American Art of the 19th century, through the captivating and suggestive romantic landscapes of the Hudson River School art movement. Arrivabene’s approach to painting stems from his artistic influences Gustave Moreau and Odd Nerdrum. He follows traditional methods that include grinding his own pigments and the almost forgotten technique of mischtechnik. In mischtechnik, egg tempera is used in combination with oil-based paints to create translucent layers which, when laid over each other, refract light creating a sense of luminosity. This attention to the minutiae has resulted in Arrivabene’s paintings actually embodying a process of alchemical transformation, in which the physical matter of painting itself is transmuted into extraordinary light-filled visions. Investigating eternity, time, the process of change, the rites of transformation, and sacred love and death, Arrivabene utilizes symbols and images that are seemingly distant from the contemporary in order to create art that verges on the philosophical, sociological and even spiritual era. These expressive realities become a form of bulimic nourishment for the artist and are manifested in continuous leitmotifs, or rather “leit-fossils” as French philosopher and art historian, G.D. Huberman would say. The “ethical” quality of his modus operandi turns colors, shapes, symbols and analogical references into the foundations of an artistic event that is not an abstraction from reality, but rather a link to his personal intimacy and to the collectiveness that surrounds him. The title of the exhibition is therefore not surprising. Hierogamy recalls the Alchemic myth of the Hermaphrodite, namely the being that encapsulates all, an entity that encompasses everything. To symbolize this amalgamation the artist adopts the amorous encounter, which reaches its apex in the poignant canvas Sacrum Facere (2016). Ultimately, union is sacred because it entails sacrifice, implying the act of doing something sacred. The harmonious union between humans, creatures, and nature often represented and contextualized in infinite landscapes. The exhibition takes its point of departure with two important paintings carried out between 2014 and 2016 (Ea -Exit and The Dream of Asclepius) and brings together works created in varying pictorial techniques – oil on canvas or wood, cracked oil on brass, and painting on stone according to the ancient Wunderkammer tradition. Ea-Exit (2015) is the almost conclusive embodiment of a cycle dedicated to the sacred Eleusinian mysteries that have obsessed Arrivabene since 2010, and about which he has created a vast body of work. These flashes of light in the paintings on display in the first room anticipate another piece of work, recently completed especially for this exhibition: Cauda Pavonis (2016). This painting of many colors is an expression of renewal; it is the arc in the sky through which the sacred couple rises up from the earth to the above after their Hierogamic union. The landscape in which their union is sealed is once again the same golden cloud that becomes the echo of Arrivabene’s clouds, the mere presences and absences, the casings that conceal and reveal the divinity. With this painting, Cauda Pavonis, Arrivabene suggests the enigma of the amorous and mystical pairing between male and female, light and dark and between the vibrant crudity and characteristic velvetiness of Renaissance paintings. It is no coincidence that Arrivabene’s undisputed beacons are 15th century artists Leonardo da Vinci and Ercole de’ Roberti, artists who, during the Renaissance, both explored man as a microcosm placed within a macrocosm. By contrast, the painting The Dream of Asclepius (2015) becomes an emblem of the horrendous nutriment for earth; a man vacillating between sleep and death is devoured by the soil and becomes, in turn, the root or sacred support for new paradoxical arboreal structures. The landscape in this painting recalls the one of the Madonna in Porto Altarpiece, by Ercole de’ Roberti – now preserved in the Brera museum in Milan – which expands onto the huge canvas beside it creating a new romantic vision of the panoramic space that collects these insane beings, hybrids made of flesh, skin, and vegetation. 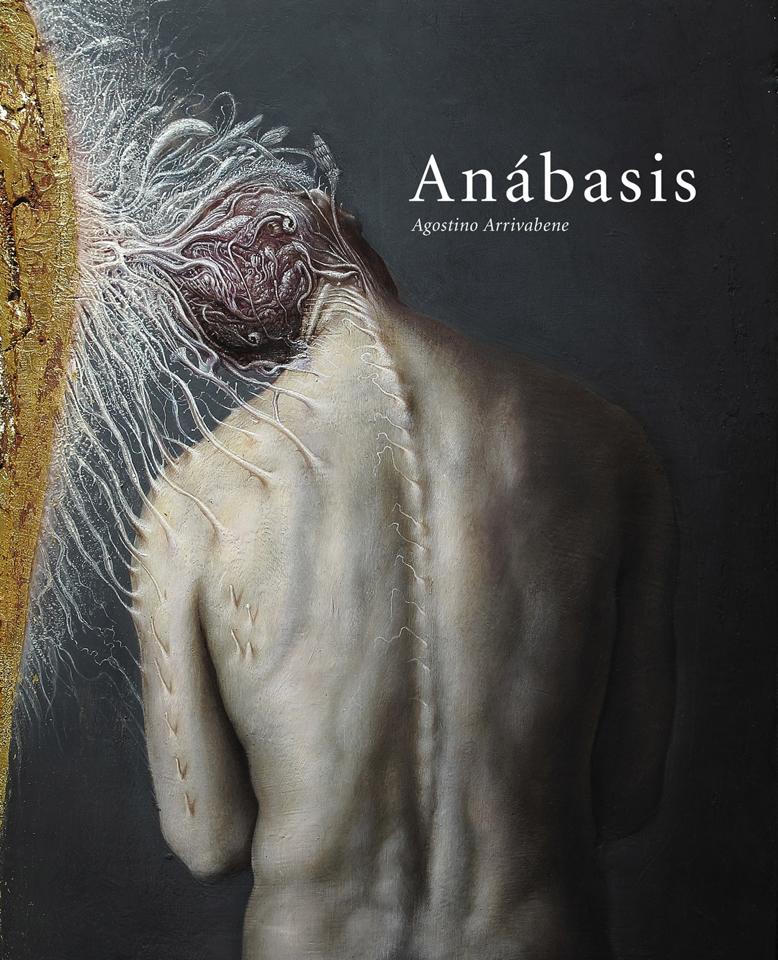 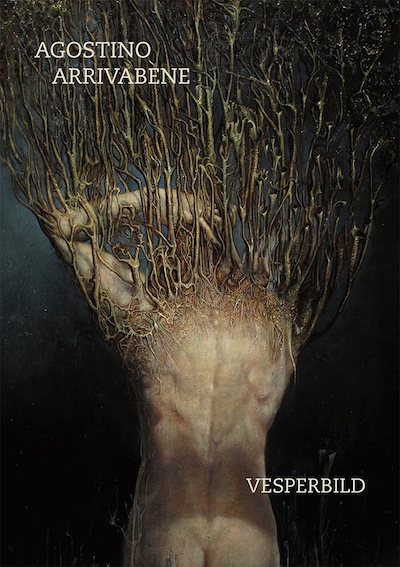 Transfiguration, twilight, and rebirth are the themes, rooted in classicism yet reinterpreted from a contemporary viewpoint, that feature Agostino Arrivabene’s latest works. From May 23rd to July 26th we find them in the solo exhibition Vesperbild, held at the Giovanni Bonelli Gallery in Milan: a sequence of images and stories drawn from the world of mythology and literature depicting the different stages of a process that, starting from inner and physical suffering, evolves into a desire for healing through dream or divine intervention, resulting in a transmutation into new bodies.

The project takes its name from Vesperbilder (literally “vesper pictures”), sculptures that made their appearance in Germany in the 14th century depicting a Madonna with the body of Jesus dead resting upon her womb. The German representations of the Pietà are often characterized by intensely expressive and pathetic accents, especially in the representation of the body of Christ, which, through the transfiguration of his flesh and face, became almost disfigured, as if to indicate an embodiment of suffering. Vesperbilder were a point of union between two extreme stages, i.e. between death and resurrection. They were the images of waiting, icons of crepuscular meditation, in short a link of union between night and day and vice versa. Agostino Arrivabene’s contemporary Vesperbilder are basically meant as a reflection on this concept of transition, threshold, and boundary between light and shadow.

These paintings are characterised by the impressive rise of a compassionate attention to what is mortal, frail, and ill. The work entitled Monatto dai muti campanelli (Monatto with soundless bells – aka corpse carrier, i.e. the person who removed corpses during a plague), which is inspired by the Ovid’ character Cyparissus, portrays a plague victim turning into a plant creature. Just as in his mythical counterpart, here the monatto is crying in an incessant, yet silent, mourn. To weep for his pain there are instead two mutant mourners, inspired by the anatomical figures of Bernhard Siegfried Albinus, as the second element of the triptych.

The polyptych dedicated to the story of Orpheus and Eurydice focuses on the ritual singing through which Orpheus tries to retrieve his beloved back from the realm of the dead. The girl’s fragmented hand and her little face in ecstasy, set aside from the rest of the body in order to form each a distinct element of the triptych, actually become a symbol of eternal supplication.

Other works on display in the exhibition show clearly to have their origin in Bruegel’s floral iconographies: here the artist gives life to creatures reminiscent of Arcimboldo’s paintings where shadows devour the identity covered only with flowers that become catalysers of generative pollen.

The exhibition closes with an eclectic project in which Arrivabene combines painting, sculpture and goldsmithery. Starting from the icon of the Dioscuri, the artist merges their identity into a new Siamese monster, whose two heads are surrounded by strange bone crowns drawn from the iconographic world of Ernst Haeckel. Eventually, the artist creates a micro sculpture of precious materials that will be turned into cufflinks, thanks to the skill of Mirco Baroso, a jeweller who has been called by Arrivabene to establish a dialogue with his work. 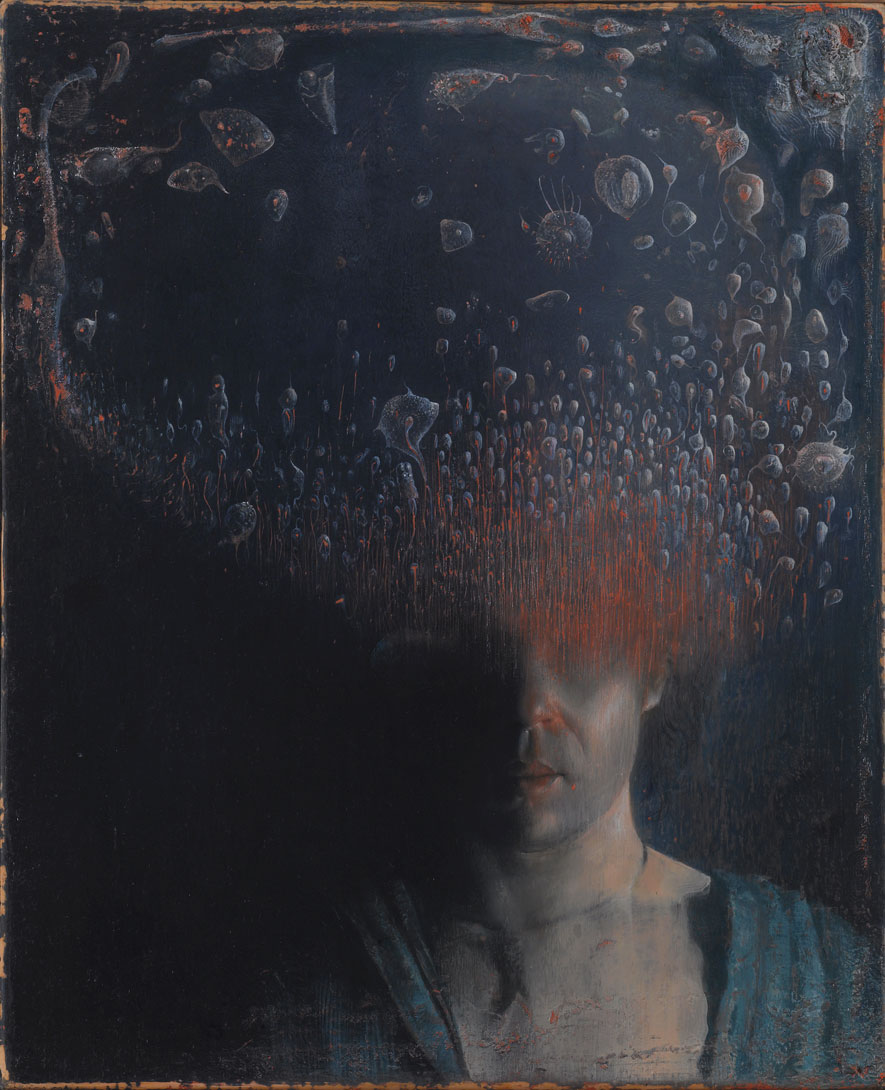 For the very first time, the work of Italian artist Agostino Arrivabene born in Cremona (1967), will be introduced to the German audience.

The exhibition will open on June 29 at Panorama Museum in the city of Bad Frankenhausen (Turingia) with the artist himself in residence under the guardianship of the Museum’s director, Mr. Gerd Lindner and Dr. Rosaria Fabrizio.

People in visit have the opportunity to admire more than 120 artworks among paintings, mixer media, drawings and etchings. Until October 20, the exhibition will go through most of the artistic excursus by Agostino Arrivabene, including his works from the nineties up to the more recent ones.

A-temporal landscapes deviated by wild-eyed glances, allegorical characters, mythological figures and sacred images are the themes developed by the artist from Lombardy who depicts in style following the artistic language of the Great Masters of the past, through which he reveals some visions transcending Infinity, visions that connect us to a divine spirit, omnipotent and omnipresent.

The paintings, often soaked with mysticism, bare the human passions, the tribulations man has to bear during life, his anguish, his suffering.

The wisdom of pain, this is the artist’s creed, of which he permeates his canvases.

The art of Agostino Arrivabene is definitely autobiographical and by reading through it we can understand the most intimate, deep passages that have marked his life, the private grieves and the undertaken paths in order to detach from them. Artistic life and personal life are perpetually mixed to each other. He sees at art like a catharsis, like an elevation from the bottom to the top, from human fragility towards the Eternal Beauty and the Highest Magnificence.

For him, art is an ascetic and alchemic road.

Actually, from time to time, he portrayed himself according to the visions he is immersed in. We can recognize him in adolescent Eros, moving through the night between sensuality and spirituality, or in a self-portrait in state of unconsciousness, or again surrounded by fireflies enlightening the darkness.

Further, during a moment of strong physical and psychological tension he appears like fogged in a bacterial cloud to re born later as a Panto-Creator Christ who saves and gives new life dominating at everything.

However, his path is always characterized by some intense and violent conflicts between the fear of pain and the hope of victory on it, between life and death, at the perpetual research for an ecstatic rapture. 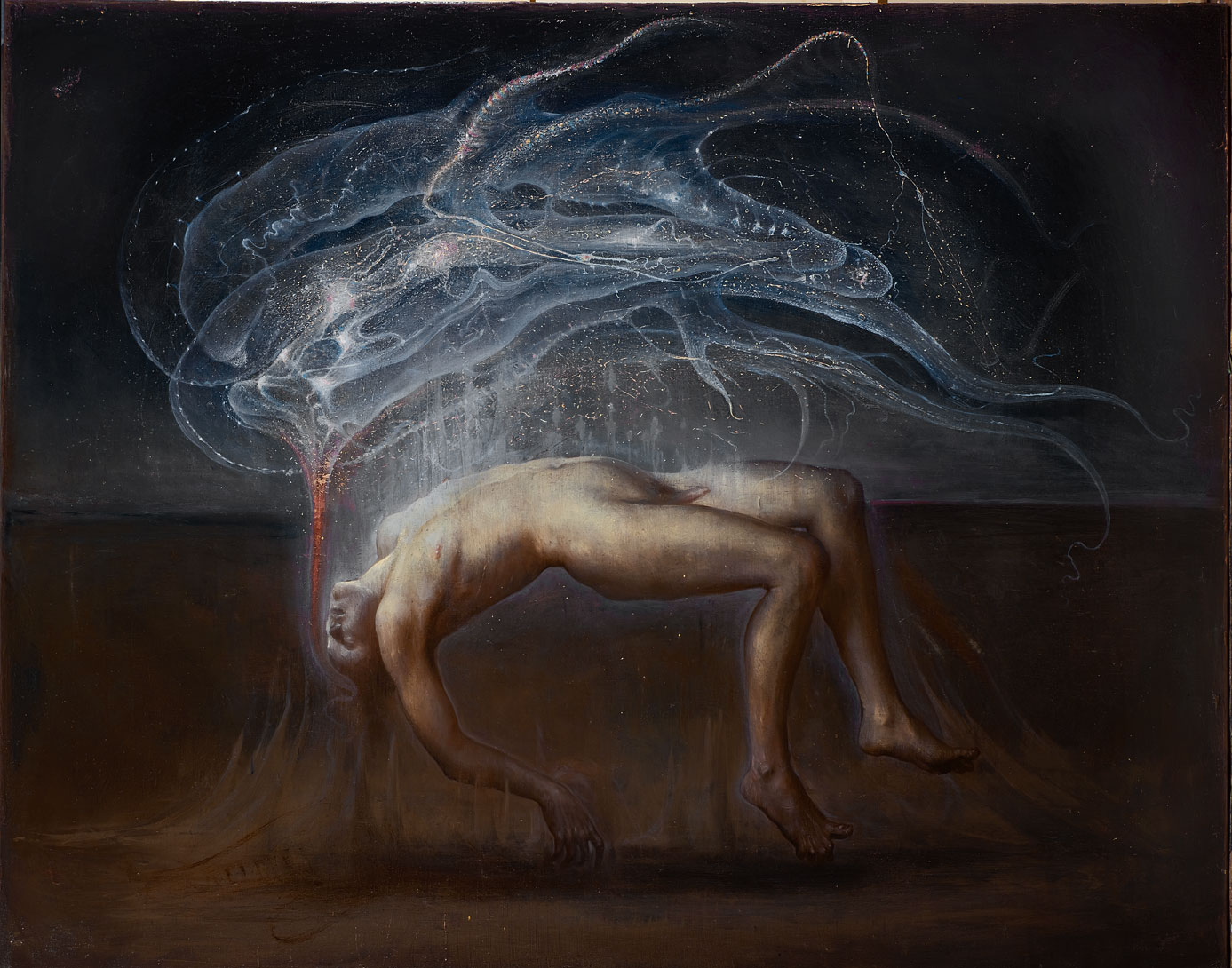 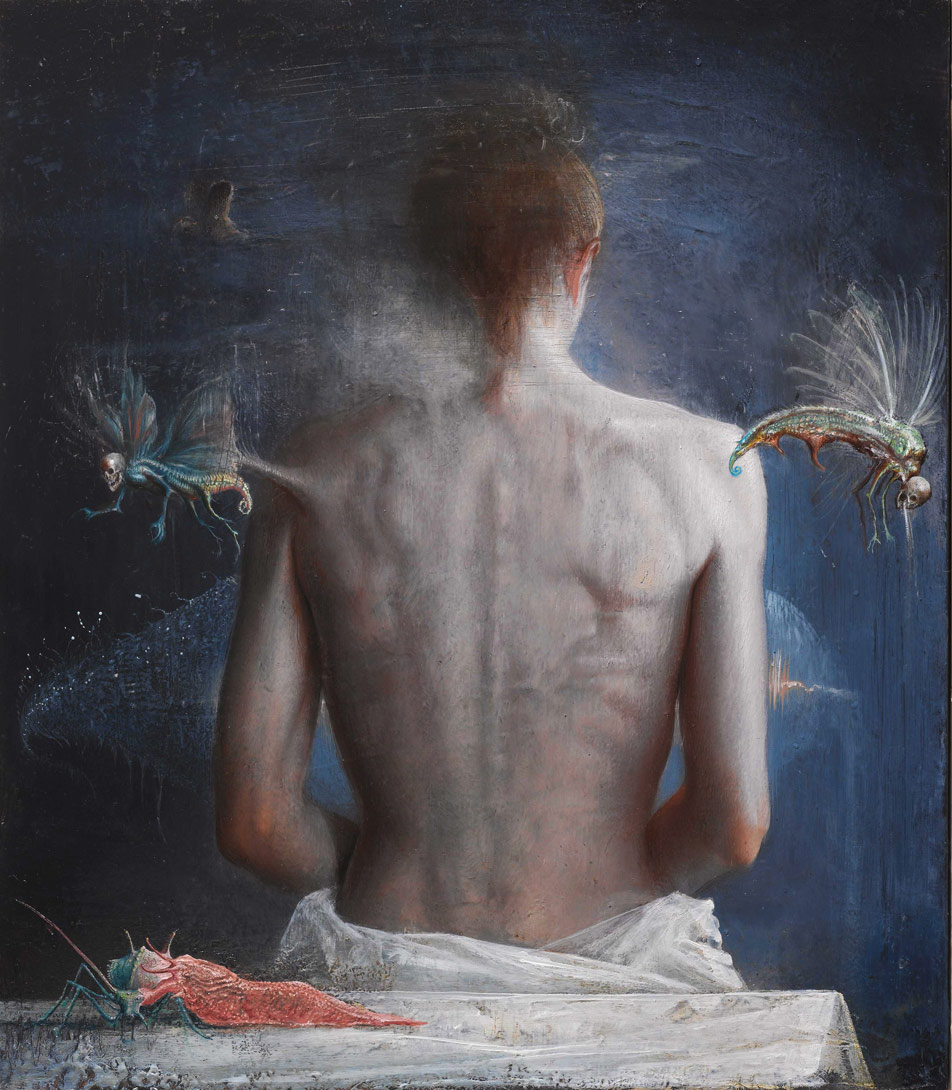